When the Morrison Heritage Museum was in operation, the Town staff directed any historical correspondence to us. In the 1990s, we received several postcards from Bettie Swanson Ries, the granddaughter of John Swanson. But the letter we’re sharing today was written in 1986 to Sam Arnold, and is included in the Morrison Historical Collection at the Jefferson Co. Archives. 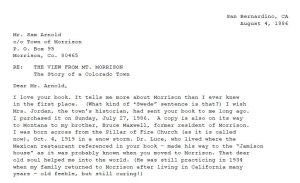 The beginning of a letter from Bettie Swanson Ries to Sam Arnold, written August 4, 1986.

Bettie began her letter with a note of appreciation to Sam Arnold for his little book, The View from Mt. Morrison, but went on to share a variety of reminiscences about her time growing up in Morrison, at the Cliff House in the 1930s. People and places remained fresh in her memory when she visited in July 1986, and she writes that “it lifted my heart on Sunday July 27 to see the young people of today enjoying Morrison and environs in their way, and to recall how we enjoyed and loved it in ours 50 years ago.” Bob Dylan had played Red Rocks that weekend. 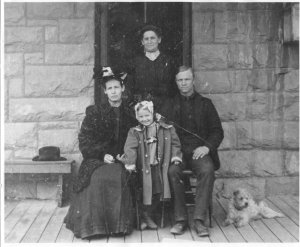 The Swanson Family, second owners of the Cliff House.

Peggy Hahn invited me into the Cliff House as my grandfather, John Swanson was the second owner. I gave her a lot of information about how it was in 1929, and how I recalled what my mother, Helen Keel Swanson said it was when she came as a bride. My father Harry Swanson never knew any other way of life except hotel living.

From Red Rocks to Soda Lakes and Berriens to Schneiders, Bettie packed a lot of stories into this one letter. Working at the Hillcrest Inn, swimming in the pool there, and climbing Red Rocks— times were different in Morrison back then. Read Bettie’s entire letter here.

This entry was posted in people, story. Bookmark the permalink.